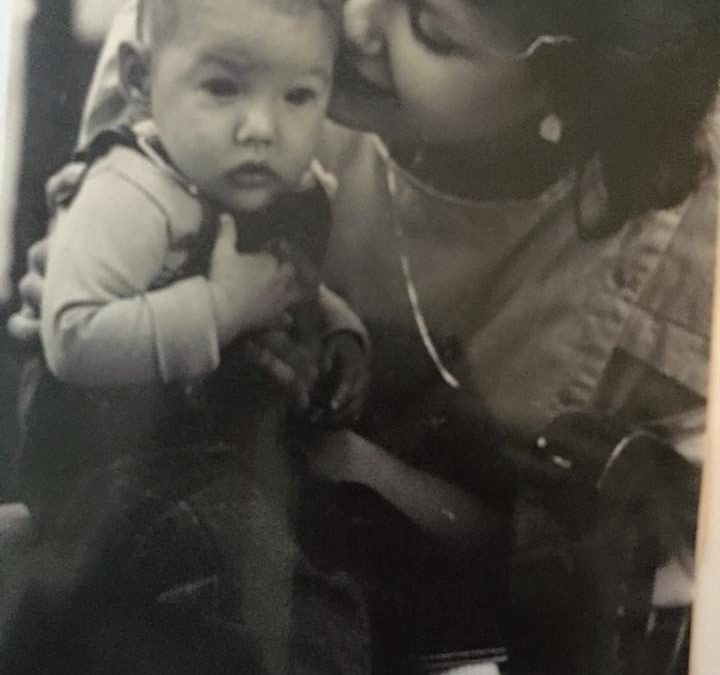 I started my “adult” life at 15 years old with a new baby and myself to support.

When people hear this they are shocked. I am now 51, my son is 35, and I live a life that defies all expectations. My mom “kicked” me out of our home with my 4-month-old son when I had just turned 16. I found out much later that she thought if she made me experience the difficulties of caring for another human, I would make, what she felt, the better choice for me at that time: to give him up for adoption. Her intentions were loving, her methods where not.

What happened instead was, I dropped out of my special school for school aged parents (9th grade) and moved in with a schoolmate and her daughter. I got a full time job at McDonalds while she stayed home and cared for our children. We both had food stamps and some government assistance that helped a bit, but it was really our partnership that made it all work. I quickly became McDonalds youngest management trainee (by 17). To this day, McDonalds was one of my favorite jobs!

I defied the odds, not because I had any special skills, but because I refused to put truth behind what people said was my predictable future. You could say I was being more right about making them wrong, then they were in being right about my fate. I was told many times I would end up with more children before I turned 18 and on welfare for life. Only people that have never had to live on welfare or food stamps think this is a life choice–or even possible to be on welfare forever.

Instead, I became an advocate for the Washington State Collation for School Aged Parents (WACSAP). I testified for state government officials on issues related to teen pregnancy, I spoke to high school students about what it was really like to “not make a choice about birth control” and I was featured with my son on an after school special about teenage parenting. All of this got people talking about how I was defying the odds. So I chose to live into that future, instead.

Each job I got was one step better than the last. From fast food to bank teller to bill collector (where I wore my first pantsuit!); I worked two jobs numerous times and relied on family friends to help care for my son. I used under the table work (house painting) or tipped work (delivering pizzas) to keep it all going. The hardest part to living independently was not paying rent or food, it was paying childcare. P.S. want to solve the “welfare problem”? Pay for childcare centers 😉

I used every resource I had, every gift that came my way, many of which I didn’t even know I had at the time. I said yes to any opportunity that looked like it would get me to the next level up the ladder of “acceptability” and “success”. I was young, pretty, white, ambitious and out to prove the critics wrong. I know I had opportunities that others in my situation would not have had, this is why today I stand for and fight for all peoples’ rights (not just the ones that look like me).

One of the biggest predictions I defied was I did not get married (or evened hooked up) to a man before my 20th birthday and I did not have more children. I made it until I was 21 before a hitched my wagon to a man I thought could take care of me and my son and who would provide stability and acceptability I craved. He did not accomplish any of that, but he did give me my beautiful daughter, for that I am eternally grateful. I was 23.

While the seeds of a leader where evident (that I can see now), a huge turning point in my life was when I did a program called the Landmark Forum. I did this 3 day program at my best friends urging in what I thought was a desperate attempt to save my failing marriage. I was 26 and I learned in that program I didn’t need to conquer the circumstances of life, I could create them! I promptly told my then husband he could leave, and set out on the next 20 year adventure that moulded and shaped me into the leader I am today.

At about 22, a friend of a friend had offered to teach me sales and give me a job in one of her carpet stores. She said “if I teach you sales you will always have a job.” She was right. By the time I did the Forum I had a good job managing one of her stores and had a good support circle around me. This enabled me to do the Landmark leader training, to get better at sales (so I thought).

Ultimately, I opened and then closed my own company to become a Landmark leader. I went on to produce, manage and lead transformative programs to over 4,000 people all over the United States. I got to travel, meet extraordinary people, get trained in skills I didn’t even know I wanted. I met and married a great man who does provide all the right things that I didn’t necessarily “need” anymore. It was in this career that I created the possibility of “transforming the world poolside with a martini.” This is the foundations for the Goddess Getaway and my company Innovative Events (IEM). I thought I would spend my life leading Landmark Programs–but, as you can see, I’m not.

In 2005, a few short years after my husband and I moved our family to Texas to follow a business opportunity, we found ourselves in downtown Dallas, running a 230 room Quality Inn when Hurricane Katerina hit. I spent several weeks running a defacto relief center. I came to understand all of my training (both in life and Landmark) had been to prepare me to be who I needed to be in that moment. It was at this point I understood, I didn’t need to know my future–what I was working towards--I just needed to follow what life brings and the future would unfold perfectly and reveal my purpose.

I spent a few more years (six) as a Wisdom Course leader for Landmark before I retired that career to discover what was next. In my “retirement” from being the leader in front of the room, I become the source in the back. I was asked to support the launching of a new charity committed to reinventing what is meant by education and leadership. The plan was to develop a course that could be delivered using a new model of learning. Learning that leaves the student not just knowing more, but being more.

My husband and I set up Innovative Event Management (IEM) and hosted the first public offering of the Being A Leader Course. We just wrapped our 7th year hosting the course. We were able to contribute just over 1.4 million dollars to support its evolution. This course is now freely available to any educator that wishes to teach a new model of leadership to their students while developing themselves to deliver learning in a whole new way.

So here we are, my son has a family of his own and is a fine man, I raised us well! My daughter is an amazing, strong and resilient woman who is in the process of finding her own leadership and contribution.

So what is MY FORMULA for being a leader?

Put your future in the hands of others that motivate you, listen to them and follow what calls to you, not what you think you should do! Now that’s how you become a leader–something you were always meant to be.