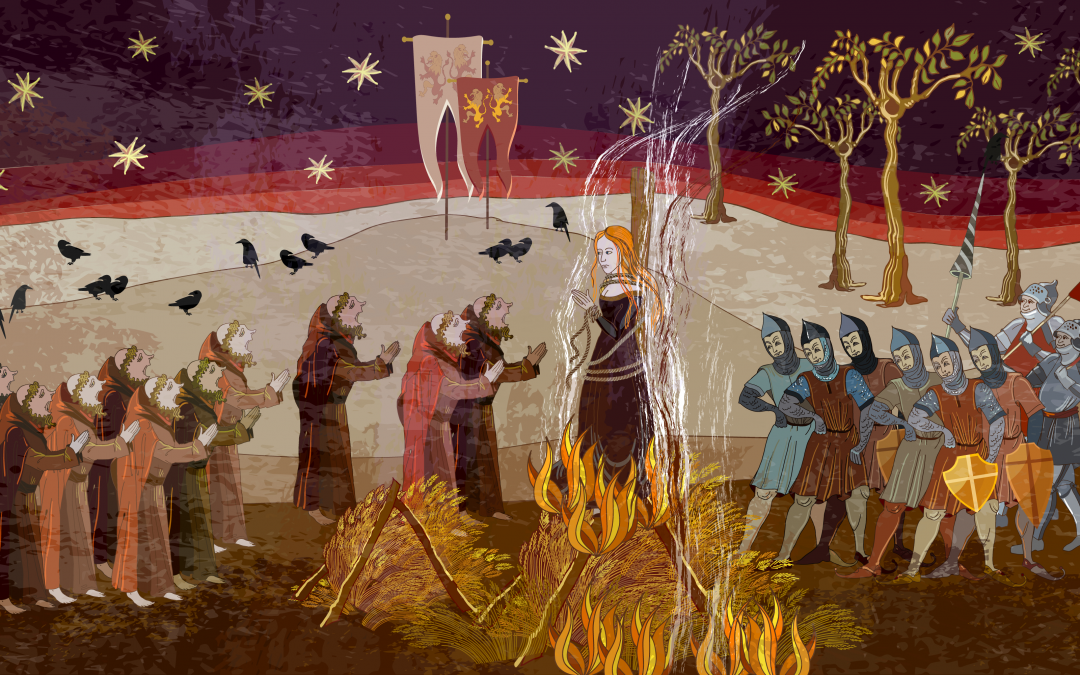 Boo! It’s once again Halloween, with its assortment of ghouls, goblins, and witches.

My question is: why are witches considered wicked Halloween characters? Wouldn’t the creepier ones be the Inquisition boys, especially the ones with matchbooks? Maybe Spanish Inquisition costumes are just too darn hard to come by. I know they would scare me a lot more than a witch, my little pretty. And why would witches be ugly rather than beautiful like the goddesses who gave rise to witch-fear?

Goddesses and Witches are related? When one thinks of “goddess,” we think of “sexy,” automatically. Most of us don’t conjure up the image of a stereotypical warts and hooked nose witch, do we? However, there’s ample evidence that ancient pre-historical Goddess worship, or at least veneration, was the source of the witch burnings conducted over 400 years in Europe. Out with the old, in with the new.

It’s interesting to me that witches are portrayed through the ages as the terrifying ones. In truth, the women who were considered witches were often aging wealthy widows, and bachelorettes (now there’s a medieval term for you) who made their living practicing old ways, based in Mother nature; herbal remedies and generations of medical knowledge. They did that because almost all other career paths were closed to them. And since newts and toads were free and plentiful in the medieval European woods, who could blame them for adding a little markup to their pharmaceuticals?

Here’s some other “enlightenment” about heretic “barbeques.” While it’s estimated that around 80% of the victims of stake-burnings were females, Jews, Romani’s, and other “undesirables” of both genders were executed as well. The source of these tortures and death? Greed and religious fervor; a problem we still deal with today. Religious intolerance has been deadly for anyone who does not hew to the dominating religion in all cultures, anywhere. Africa, Europe, North and South America. This was true in the past and continues in the present: the future is up to us.

The Catholic patriarchy, as enforced by the Spanish Inquisition — other countries also had the Inquisition — were ambitious in their drive to find and destroy Mother/Goddess worship. They spread terror to those who practiced the ancient Mother ways to coerce the relatively new Father worship on everyone.

Now here comes the really chilling part about the so-called witches. Guess how many were burned in Europe during the Middle Ages? Most people I ask guess 1,000, maybe 6,000. Well, have I got news for you… four-centuries-old news. Some contemporary historians place the number at as much as 8 million... but definitely in the millions. Burning at the stake is an ambition squelcher for sure.

Please understand that I truly don’t mean to make light (pardon the expression) of such an incredible tragedy, but there are many centuries between these woman-burnings and now, so I’m able to make a few observations without naming names, pending notification of relatives of course. Since traditional historians don’t seem to think millions of women are worth mentioning, we’ll leave it to a humorist to bring light (there’s that word again) to the darker side of things.

Many people to whom I’ve told this can’t believe there’s been no mention in the Big History Books of the multitude of women burned as alleged witches. I maintain that we do remember — at a primitive, collective consciousness, cellular level — which explains why it’s the men in our culture who barbecue; ask a woman to light up the grill, and she’s apt to suddenly have to mop the kitchen floor, bucket of water at the ready.

Oh yes, the Inquisition had quite a nasty reputation with women in those days. Even sympathetic men had a hard time relating to women. The most well-meaning man could ask a woman if she wanted a light and she’d be a half-mile down the village path before he could scythe another stalk.

So, this Halloween, if cheesy costume companies can come up with a “sexy” Mr. Rogers costume, how about going with a “sexy” Inquisition outfit? Witches are such old hat. Cackling witches. Yawn. The Crispy Inquisitor could be a hit at costume parties by including “snap, crackle and pop” sound effects. Run!!

Ellen Snortland has written a gender column for decades: contact her at www.beautybitesbeast.com