We Have a Winner! 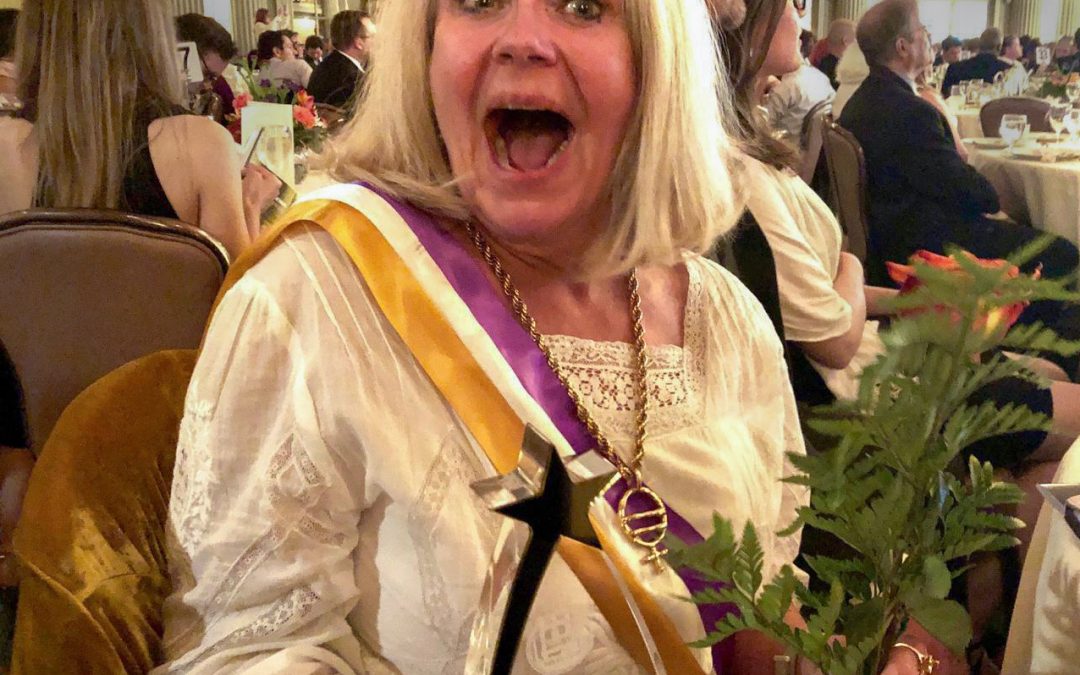 The experience was like nothing I’ve ever experienced! We were part of an amazing mix of people either nominated for, or receiving, awards: from barely-known indie journalists to big names like Henry Winkler and Kareem-Abdul Jabbar.

Finally the moment came for Ellen’s category. I’m literally holding my breath and then—and then we hear “…and the award goes to … ELLEN SNORTLAND!” and I erupt! Ellen actually yelped “WHAT?!” while I whooped-whooped. We made so much noise we didn’t hear the rest of the announcement, which was recounting what the judges said about the column that just won: “Judges’ comment: Deeply personal column with humor and insight. Terrific writing.” I’ve always been proud, and in awe of, Ellen’s talent in all things especially writing. And now even more so.

The experience was both amazing and surreal!

First, just being there was a unique experience. The event was at LA’s historic Biltmore hotel’s Crystal Ballroom — a place where presidents and heads of state have been honored and/or had events. While I’ve been at the Biltmore many times over the years, this was special. During the mix and mingle part I became aware of just what a mix of people were there: from barely-known local journalists working at tiny indie and college-based print, TV and web outlets, all the way up to those with a national presence, working for the biggest publications and TV stations. (Kudos to the LA Press Club for being so inclusive.)

Once the awards got underway, the vibe was also decidedly eclectic, sitting right in the middle of ‘freewheeling / anything goes / keep the drinks coming’ to ‘we’re all here to honor free speech and those who put their lives on the line to get the story out.’ Our table was also a factor in that. We were SUPPOSED to have been seated much closer to the front; however, we got assigned to a table 2nd from the back. As it turns out, that was exactly the right thing as everyone there was either from the Pasadena Weekly (Ellen), or the Long Beach based “Argonaut” newsweekly. Ellen sat right next to an Argonaut guy up for best editorial, who used to work at the Pasadena Weekly; Ellen and this guy are friends. So everyone at the table was rooting for everyone else.

What we didn’t realize is that the awards themselves have DOZENS AND DOZENS of categories and therefore winners would be announced in groups and come up in those groups to receive their award; there would not be time for an acceptance speech. Only the ‘big category’ winners got to do that. I’d wondered what Ellen would say if she won, and soon realized that wasn’t gonna happen. *sigh*

All night I’m wrestling with a few things. One of which is that I had a suspicion (later validated) that being nominated for, and possibly winning, one of these awards is a BIG DEAL—second in esteem to the Pulitzers. I knew Ellen was trying to downplay the whole thing to avoid disappointment if she lost, even though—YES—being nominated IS an honor.

So in my mind I was kind of doing the same thing Ellen was (when we compared notes later): “oh, I want her to win! But what if she doesn’t? She’ll be disappointed, and I’ll be disappointed too. And then I’ll take offense at whoever DID win. And awards aren’t important. Yes they are! NO THEY AREN’T! And she’s also competing with her own editor; if she wins, how will he take it?” (Answer: very well.) And then I’d force myself to be present to all the amazing people and stories I was witnessing, and the work everyone did all year long and I’d feel better.

Finally the moment came for Ellen’s category… I’m literally holding my breath, and our friend Dawn was, too. And then… and then … we hear “and the award goes to … ELLEN SNORTLAND”! And Dawn and I and Ellen erupt! Ellen actually yelped “WHAT?!” while both and Dawn and I whooped-whooped. We made so much noise we didn’t hear the rest of the announcement, which was recounting what the judges said about the column that just won:

Ellen was momentarily so stunned I had to say to her “get up and go get the award!”

I’ve always been proud, and in awe of, Ellen’s talent in all things especially writing. And now even more so.

Toward the end of the night, Henry Winkler was honored for both his contributions to civic life and also support of journalism, and of protecting journalists. He talked about the ‘toxic sludge’ emanating from the White House, threatening to engulf us, and that journalists were our “levees” that protected us, urging everyone to keep up the work so that the levees would hold. It was extremely moving.